Is it called cycle touring or bikepacking?

Either way, it was pretty much the perfect way to avoid major highways and spend 6 days pedaling from Portland to the coast (and back). To jump start the adventure, Jody and I took the Max train to the end of the line in Hillsboro before continuing west and south near Yamhill. We pedaled south just east of Hwy 47 in the wine growing valley before the roads turned to gravel and became lumpy. The hills were warm with the smell of freshly cut hay as we stopped to snack on peanut butter, (slightly bruised) banana and jelly tortillas in the shade along Puddy Gulch road.

Along the way we met, Mark Davis,  an experienced cycling nomad who had traveled the globe on his old Holdsworth road bike. So of course we stopped in the middle of the road to chat. He carried along very few things and was happy to get directions from locals along the way, rather than be weighed down with a bunch of maps.

The gentle climb up to the top of Nestucca River road was hot in the afternoon sun before the sweeping downhill towards Dovre campground for the night as we’d planned. A mile or so before the final destination we found the road closed due to a massive culvert replacement. A huge gap 25 feet wide and 15 feet straight down just past the dormant trucks and earth movers prevented us from getting through. This would be the first of a few detours on the route but that is part of the adventure. A little backtracking past the rad closed sign and we found the perfect camp spot along the river for the night complete with fresh water and a loamy spot for the tent.

Started with the official reroute up Bald Mountain road through the morning light and young conifers. This area is popular with OHV users and we were happy to start off mid-week to avoid the traffic.

Topping out near 2900 feet made for some great views of the Willamette Valley to the east and a sweeping downhill in the cool air. A fully loaded touring bike rides like a Cadillac over most roads and with the right balance to the bags, it cruised along like a dream. Some snacks before connecting back to Nestucca River road after adding 6 miles and some climbing to the route then onward to Beaver for the finest in gas station lunch breaks. This was also the first cell coverage since leaving PDX so we checked for calls while eating Pringles, dried pineapple and Snickers.

The drivers were few on a weekday and most were large working trucks who’s drivers waved. We were then on Hwy 101 for a short but nerve wracking pedal on the shoulder connected us to Sandlake road and up over the climb to Tillamook head to Cape Lookout for the best biker/hiker spots on the coast. It was a good day with some big climbs at the end so we were happy to roll towards the ocean. Even with a full campground, the ranger was welcoming with plenty of space for tents and bikes. 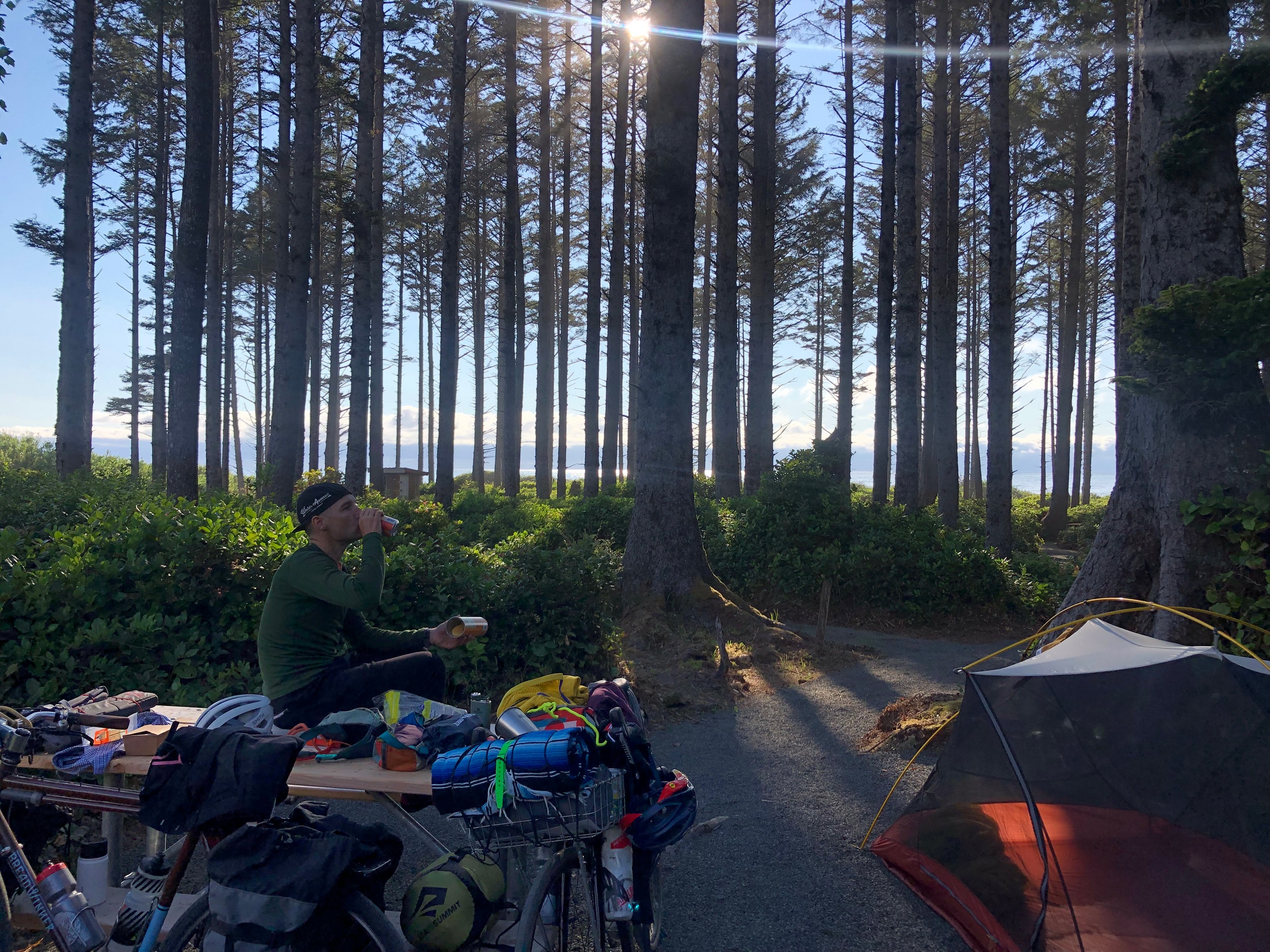 Friday was spent riding along the 3 capes route north from Cape Lookout. The air was crisp and the ocean air made our camp breakfast taste extra good. Maybe it was the salt!

The road North to Oceanside was a little busy but after a climb to Cape Meares Lighthouse, the road was closed to cars due to a massive landslide years ago. Rather than repair the road year after year, they closed it permanently to cars making this section wonderful to ride with moss and ferns growing towards the center line. There were some epic views of the Pacific over the old landslide section. The road looping south along Tillamook bay had a nice tailwind taking us to a great burrito cart for lunch before turning back north to leave Tillamook behind.

We were lucky to find a route off of Hwy 101. A few rural roads to the east offered a nice reroute to Bay City and connecting to Hobsonville road before the day’s final stretch on Miami River road. Winding through the valley just over the hills from 101 and the ocean, Miami River road rolled along with only a few cars. Even with the narrow shoulder it felt better than the main tourist route on the ocean. This section of the coast is not particularly beautiful either so riding around it was fine. We stopped at the Mohler market for some dinner fixins  so we wouldn’t have to go out of our way to Manzanita. The only bummer was they wouldn’t sell us single beers so we split a big beer that night. We then headed west to Nehalem Bay park which is a large coastal park which was also full. The full campground sign was no match for the biker/hiker tent spots, nice rangers and warm showers. Not bringing towels was fine as we dried off in the sun before dinner. We did a little backtracking to start off the 4th day and found another small road taking them around the busier Hwy 53 called Old Cheesehouse road. It had a “road closed” warning but we all know those are more suggestions than hard rules. A few hundred feet later it was clear the road did stop but a blackberry-lined path went through to the other side after a hundred yards or so. We stopped for a few minutes to pick off stickers and prickles before we were back in business!

Another stop at the Mohler market for the nights dinner since we wouldn’t be passing another resupply before camping on the Nehalem River. Foss road off of Miami Foley road follows the abandoned railroad line and the Nehalem river along some beautiful gravel and great camp spots. Even for a Saturday near the coast, the traffic was mellow. The old railroad line begs to be explored along with the great swimming holes along the Nehalem river. Some of the hills were steep and spicy but the views compensated for the effort and we had all day to ride 35 miles. We stopped where the Salmonberry River comes into the Nehalem and explored the old railroad bridge. This is part of a proposed route to the coast from Timber which will be a wonderful car free option in the coming years. Getting closer to the camp spot for the night it was clear that spots were filling up fast at the first come locations. The Spruce Run camping spot was great and had one tent spot left which we quickly snagged.

A quick river bath in the sunshine and pasta dinner with Jody’s dehydrated veggies (yum!) before we watched the bats swoop overhead at dusk picking bugs out of the air. Sunday was our big day and I was eager to explore the tiny line on the map called Misty Mtn. road. It  was a bust so we went back down the gravel hill to pedal along Hwy 26 for a few miles before looping around to Hwy on 103 north. We were happy to get off of Hwy 26 asap. An early start and dialed camp breakfast routine with oats and fruit made the morning easy and fast.

Smooth pavement and sunshine all day.

The route continued to follow the Nehalem past rural landscapes and timber country making a arc north and eventually east and then south again towards Vernonia where it slows to a murky crawl. This stretch of 103 and 202 had a lot of American flags, big trucks and some not so great drivers despite us waving to everyone. A nice stop in Birkenfeld for lunch in the shade of an old barn where I daydreamed about opening a market and camping spot for motorcycles and cyclists.  After lunch we made good time towards Vernonia and a resupply at the local market for dinner. The last leg of the day was along the car free Banks Vernonia trail to Stubb Stewart park and a luxurious cabin for the night. Jody suggested we take the “short cut” to the cabin via the singletrack which was not easy but a nice way to finish the last night of our trip.

Not setting up a tent for the night felt like a nice change along with some deluxe mac and cheese with fresh veggies. The last day of the trip started out with an easy roll on the Banks Vernonia trail in the trees and finished with a hot day in the sun through the familiar roads around Banks, North Plains and winding up the least steep climb on the heavy touring bikes back to Portland. We stopped at Plainview market at Skyline and Cornelius Pass for our last tour lunch stop. Jody finally got her Oreos. We opted to take Springville road down to the St. Johns bridge after the rolling terrain of Skyline road.

The feeling of ending the tour was settling in for better or worse.

Portland felt calm and welcoming as we pedaled through town with a stop at the store to make dinner. We did eat outside and it felt nice to shower. It’s amazing how a nice week of touring refreshes the soul and tans the skin.

Story by Ira Ryan. Photos by Ira and Jody.

TONIGHT is the @swiftsummitnw kick off party at ou

We’re hosting @swiftsummitnw for a party to kick

"I was often convinced I was the only cyclist on t

When we build your bike, we don't know exactly wha